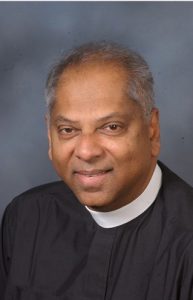 Fr. Nihal de Lanerolle has been ministering at St. Paul’s since 1994, first as a Presbyter with the Middlesex Area Cluster ministry of which St. Paul’s was a constituent member and since 2010 when the church regained independent status as its Missional Priest. In addition he has served the Episcopal Church in a variety of capacities – Curate at St Matthew’s, St. Paul. MN; supply Priest at a variety of churches; Priest Associate (8 yr.) and Interim Rector (2.5 years) at St. Paul’s Episcopal Church New Haven; College Chaplain at Trinity College, Hartford, Connecticut (1999 – 2002) and Chaplain to the Episcopal Church at Yale (2002 – 2013). He was born and grew up in Sri Lanka where he was educated through college obtaining a B.Sc. honours degree in Zoology. In addition to his ministry in the Church, Fr, Nihal is a full time Professor in Neurosurgery and Neuroscience at the Yale School of Medicine where he has worked for the past 36 years teaching and conducting research on Epilepsy and Brain Trauma. He holds a Doctor of Philosophy degree in Neuroethology and a higher doctoral degree of Doctor of Science from the University of Sussex, England. His theological training was at the Jesus College and Ridley Hall in the University of Cambridge, England and holds a M.A. degree in Theology and Religious Studies. His hobbies include reading, listening to classical music, playing squash and badminton, traveling and hiking. 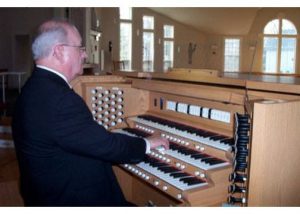 Richard (Rick) Fowler began his interest in the Church and church music at the early age of nine while singing in the historic choir of men and boys at Trinity Church on-the-Green in New Haven. It was at this point that he decided to dedicate his life to the ministry of music in the church. When his voice changed he began his formal organ study with G. Huntington Byles, Organist and Choirmaster at Trinity. Further study was done with Dr. Alexander McCurdy, head of the Organ Department at Westminster Choir College where he received a bachelor of music degree.

During the years he has held positions in major Episcopal churches in the Connecticut area and retired in 2012 from Most Holy Trinity Church in Wallingford where he had been for eighteen years. A year later he was called out of retirement to become Organist and Music Director for St. Augustine Cathedral in Bridgeport, CT while they were searching for a permanent Organist. He spent a little over a year in that position and has now been kept busy doing substitute work in area churches.

Further study was done with Rodney Hansen, Albert Russell, Edgar Hilliar and Jack Ossewaarde at St. Bartholomew’s Church in New York City. He was elected a member of the American Cathedral Organist and Choirmaster’s Association and is a past Dean of the New Haven Chapter of the American Guild of Organists. Mr. Fowler has served as a member of the Diocesan Music Commission for the Episcopal Diocese of Connecticut. He also served in the National Association of Pastoral Musicians as Director of the Hartford Archdiocesan Chapter and on a national level as a member of the Professional Concerns Committee. Up until his retirement he also maintained an active recital schedule doing dedication recitals for the Allen Organ Company. He is an Episcopalian and a member of Christ Church, New Haven.